Early in October 1947, a large brush fire menaced the homes and property on Pierpont Avenue. The volunteer fire departments of Cronomer Valley and Orange Lake came to the aid of a few men who were fighting this fire without proper equipment. This incident brought out the need for a more local volunteer fire department, the organization of the Good-Will Fire Department. On October 31st, 1947, the first meeting was held and the fire department was organized. Anthony Bianco became the first President and Joseph Wicker the first Chief of the Good-Will Fire Department.

The opportunity arose almost immediately to purchase our first fire engine. Unfortunately the chances looked very slim with no money in the treasury. Thanks to charter member Joseph Pacenza, the money was advanced to purchase the first fire engine on November 7th, 1947, a 1920 White, from the City of Newburgh.

Shortly after the purchase of the second fire engine on March 4th, 1948, the Good-Will Fire Department Women’s Auxiliary was formed and Mary Valdina became their first President. Through their spirited efforts and hard work, the Good-Will Fire Department became owners of five building lots on which a firehouse was to be erected. Fundraisers of many types were held by the fire department and auxiliary to support the efforts of the department. On Friday, May 13th, 1949, the first annual minstrel show was held at Newburgh Free Academy and an ad book was published, supported by many local businesses and boosters.

By 1949, Good-Will had erected their first fire house on Pierpont Avenue which housed one of the 1920 White Pumpers a 1937 Mack Tanker which held 1500 gallons of water. Up to this point the engines had to be housed in a private garage owned by Anthony Bianco. The 1937 Tanker was the first fire tanker in service in Orange County and only the third to be placed in service in New York State. Good-Will’s tanker could be seen responding to in district fires and mutual aid calls several miles away, including forest fires on Storm King Mountain. 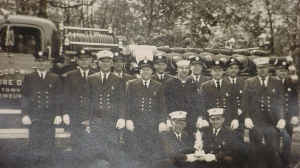 rom the Galloway Ford Dealership in Newburgh. After several man-hours of hard work on the part of the membership, the body, pump and equipment was transferred from the White to the Ford. Good-Will now had a new fire engine.

The 1950’s saw the beginnings of the growth in the fire department and the changes in the fire district. The Original Mack Tanker was replaced by a 1947 Mack of the same size, the purchase of a 1958 FWD Pumper, and the conversion once again of the 1952 Ford into a 1000 gal. Tanker. The district was also changing from fields and farms to residential and commercial. Plans were being put in place for new roads and shopping centers within the fire protection district which adjoins those of Winona Lake, Cronomer Valley, Middlehope, Vails Gate and the City of Newburgh. Housing developments in the Newburgh Gardens and along the 17K corridor sprung up.

With the construction of Interstate 84 planned to go through the overhead doors of the old firehouse on Pierpont Avenue, a new home for the fire department was needed. Two buildings and property were purchased at Good-Will’s present home, #1 South Plank Road. In 1961, after needed renovations, the Good-Will moved in. The 1960’s saw the beginnings of the new age of retail store in Good-Will’s district, the shopping center. On the site of an old farm on Old Little Britain Road, Ed Lloyd had built a shopping center where you could get your groceries, clothes, car parts and a hair cut, after eating lunch, all under one roof. The Mid-Valley Mall, with 50 stores, also opened in the 1960’s at the opposite end of the district from Lloyds. 1964 saw the purchase of a new FWD Pumper/tanker to meet the expanding needs of the district and Good-Will was hosting its first OCVFA Convention and parade. The first chief of the department, Joe Wicker became Good-Will’s first county President. Soon after the purchase of the new Pumper/tanker, the alley between the two buildings was closed in to add a third truck bay. To help defray the costs of the growing fire department, Good-Will began to hold bingo games every Saturday night, still a weekly event almost 40 years later.

The district continued to change and grow through the 1970’s and in 1972 a third FWD Pumper was purchased. The new Zayre’s Plaza and Shop Rite developed out of what was once a picnic grove and brush fires and barn fires were being replace by structure fires, car fires and accidents. The Mid-Valley Mall was plagued with major fires through the 1970’s. Fires claimed a warehouse, a restaurant, and a group of three stores on two occasions. A quad of ten stores burned on another occasion and over twenty fire departments were on the scene to assist Good-Will, or as the officer in charge requested in mutual aid, ”SEND EVERYBODY!” 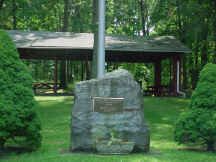 As the 1970’s continued, Good-Will was once again fortunate to host the Orange County Volunteer Fireman’s Association convention in 1974, with Department Past President Paul Blanchard as County President. About half way through the parade the heavens opened up and it became one of the wettest parades on record. In 1976 Good-Will purchased a new type of emergency truck from Super-Vac. This truck was equipped with twin light towers supplying a million candle power of light, a built-in hydraulic system for pumps and power equipment and a built-in air cascade system to refill air packs and later the Jaws of Life was added to its compliment of equipment.

Good-Will continued to grow, purchasing adjacent property and building a small picnic grove to be used for department and member functions. Older equipment was replaced with new. A 1984 Sutphen Pumper was purchased to replace the 1964 FWD, which had been a workhorse for 20 years. In 1989 a new and larger Super Vac replaced the 1976 unit and a new 1989 Pierce Arrow replaced the 1972 FWD. In each case, the truck being replaced was kept in service by other fire departments in need of a good, reliable fire engine which had been well maintained through the years.

Good-Will Fire Department continued to change and evolve through the 1990’s. A chief’s car, a retired police car, was added and then replaced in 1994 by a new Chevy Suburban. During the ice and snow storms of the late 90’s, this vehicle and a contingent of Good-Will Volunteers made the trip to upstate New York, near the Canadian border, under long distance mutual aid. In 1998 the suburban was turned over to the assistant chief and a Jeep Cherokee was put in service as Car 1. Also, in 1998 new Pierce Pumper was purchased to replace the older Sutphen.